Mariana Laskava is Ukrainian. She is a missionary with Word of Life, a mission with a Bible institute based near Kyiv.

She had to flee quickly, with a small suitcase, because of the threat of bomb attacks that were about to begin in the country’s capital.

After a few months of service among Ukrainian refugees, Mariana was able to trip to Spain, where she will also attend camps this summerr.

In September, she hopes to return to Kyiv, to serve in the Bible school where she accompanies students as they grow in their journey of faith and also works as a translator for several English and Spanish speaking teachers.

Spanish news site digital protestant spoke to her about her experience of this conflict and the current situation in her country.

Question. What kind of work do you do and what was life like at Bible College before the war?

Answer.. I am a full-time missionary in Word of Life Ukraine, a mission that works with young people focusing on evangelism, but we also have a Bible institute.

Each year, in September, a group of 30 to 50 young people come from different countries, both from Ukraine and neighboring countries, to study the Bible and live in the institute for one or two years.

We guide them in their studies, help them learn how to develop their ministries, encourage them in evangelism – we do a lot of street evangelism in the streets of Kyiv – and help them grow in their Christian life, both training only by the example they may have of us.

We spend time with our students and build a deep relationship with them.

Q. Do you mainly work with young people?

A. Students usually enter Bible institute after finishing high school, before starting college, so they are usually between the ages of 17 and 19.

In two years, they are trained in the Bible and Christian life in the center we have there, so that they can then develop their future work or mission.

Q. All this work was interrupted in February with the Russian invasion. How did you experience this?

A. In December, when Russia began to build up troops on the border, television news was already talking about a possible invasion.

We as a mission were praying that this would not happen. But two weeks before the war started, we asked the students to leave. We moved the holidays they used to have in March to early February as the situation was getting tense.

Mission leadership in the United States asked us to pack our bags in case we had to evacuate.

The day before the invasion, they called us from emergency, that we had 40 minutes to prepare for the emergency evacuation.

A lot of people on the team didn’t expect this to happen. I thought it could happen, because of the buildup of soldiers at the border.

The Word of Life Ukraine property has become a key point for aid and food distribution. /WOL

Q. How did you flee?

A. It was all very traumatic, what we went through that day and what many went through in the days that followed.

We left quickly as we had been warned that the bombardment of Kyiv would begin that night, but we were only able to pack a small suitcase.

It’s difficult, because you can’t put your life in a suitcase and you leave your house in danger of being bombed. You also leave your family there, people you love, who do not leave the country, but trust that they are in the hands of the Lord.

It was a shock, something that tested our confidence a lot. It was traumatic.

Q. You are now in Spain, but what was your journey during these months?

A. I am now in Spain and many people take care of me and take care of me. But when the war broke out, we went to Hungary, to the property that the mission has there.

Then, a week later, part of the team traveled to Romania, where the mission began to receive refugees arriving from Ukraine.

In two months, we received a hundred people whom we were helping and serving.

Q. What are your plans for the future, do you think you can return to Ukraine?

A. Most of our missionaries have already returned to Ukraine. The men stayed and during those months they rendered so many services, distributing food and helping, even risking their lives.

The women and children have left, and some are still in other parts of Europe. I plan to go to a camp in the Czech Republic in August and then perhaps return to Ukraine to continue the work in the mission.

Q. Do you currently have family in Ukraine?

A. Yes, my mother and my brother and his wife did not want to leave. They were in danger in Kyiv, but God took care of them, I prayed a lot for them and we are still in constant communication.

Q. When you face such an unexpected and complicated situation, what do you learn about God and your relationship with Him?

A. When you enter a storm like war, if you have a close relationship with God, you weather the storm by clinging to something stable.

The emotions, the traumas that you go through can be very damaging, but if you hold on to God, the real Strong Tower, you can know the Lord even more.

I work in the field of personal counselling, and now I understand better how to help those who are suffering. Since I have experienced so much suffering, I can now better understand this situation.

God opens doors, when you have a good relationship with Him, you come out stronger, but if the relationship is not good, the situation can lead you to crushing. 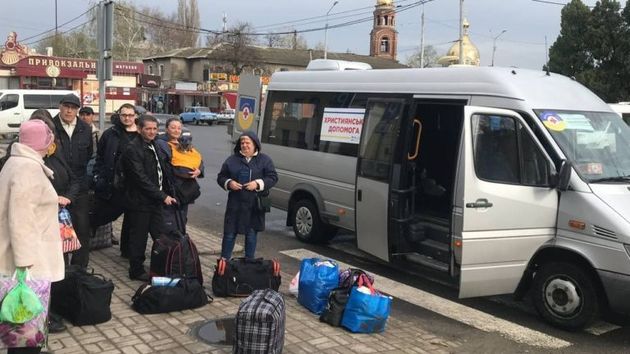 The Word of Life team assisted with evacuations, and this work continued in the Donbass region, where armed conflict continues. /WOL

Q. Have new ministry opportunities been opened up?

A. In this storm, we were able to bring the gospel to many people. Where they found themselves without housing, without resources, 90% of the volunteers working in Ukraine are Christians.

A great testimony is given. As a mission, we help by bringing goods, food, clothes, water, bread, evacuating people… And every opportunity has been used to preach the gospel.

We are involved in something big because at that time about 5,000 people heard the gospel through our missionaries.

Q. How do you think the country is coping with such a burden? How do people react among those who do not yet know God?

A. From what I understand from those who work in churches giving food and help, churches are filling up with people who don’t know Christ.

A church in kyiv that I know well organizes meetings outside the church building, because inside there is room for about 80 people and there are services attended by more than 300 people . They do activities for children, for women.

I have seen churches perform baptisms. Thus God is glorified even in the midst of the darkest hours of our country.

Q. Why is it important to have God in your life in a crisis like this?

A. Life flows from God and in his presence there is fullness of joy.

If anyone wants to experience a trial with the strength and joy of the Lord, we must trust Him, because even by allowing this trial, He works in our hearts, providing for the needs, teaching us and placing us where we need to be. .

When you trust God you can see all that, but if you don’t have God you can only see the bad things. If one is close to God, one can see God’s work in the midst of great difficulties.

Q. Over time, we seem to lose our sensitivity to Ukraine. How can we help you and your country?

A. There are several ways. It is very important to pray. Our soldiers testify that God protects their lives. You have to pray for the war to end, for the bombs not to fall where the people are, and for God to preserve our country.

You can pray that the gospel will continue to spread and that many will become children of God.

You can also help with finances, through different entities.

And the third way would be, once the war is over, to set up work teams to help rebuild homes and infrastructure.

Posted in: Evangelical focus – europe
– “God is glorified even in the midst of the darkest hours of Ukraine”