(RNS) – A small conservative Christian college in Pennsylvania has become the latest battleground in the evangelical “awake war.”

Since 2020, concerns about “revival” — a term used for those aware of systemic racism and, recently, often linked to critical race theory — have pitted Christians against each other on the pews and in the classroom. Grove City College, nestled in quiet Grove City, an hour north of Pittsburgh, Pennsylvania, is a prime example.

On February 16, the college’s board of trustees declared that it “categorically rejects critical race theory and similar ‘critical’ schools of thought as contrary to GCC’s mission and values.” This week, in response, a petition from Grove City alumni, parents and students called on the school not to prevent discussions of race and racism on campus.

The board’s decision and dissenting petition follow months of debate over whether Grove City College has succumbed to “mission-drift” from its traditional values.

The controversy began last fall, when a group of parents and alumni penned a petition raising concerns that critical race theory, an academic framework that views racism as embedded in institutions and policies, “threatened the academic and spiritual foundations that make the school distinctively Christian”. .”

The authors of the Nov. 10 petition, titled “Save GCC from CRT,” called the theory a “destructive and deeply unbiblical worldview” that views white people as “inherently racist” in a society that “favours whites and oppresses blacks and other minorities”. .” This, they said, undermines the Christian understanding that humans “equally share the image of God.”

“What’s happening in Grove City is what’s happening within the conservative movement in America,” said John Fea, professor of American history at Messiah College in Mechanicsburg, Pennsylvania. Fea told Religion News Service that debates over awakening and the CRT divide theologically orthodox evangelicals into two camps: a “Trumpian” wing that sees the CRT as antithetical to the gospel, and a “free inquiry” wing. who believes the CRT can be used as a tool. to understand racial justice.

At Grove City College, where only 6% of undergraduate students are “multi-ethnic,” according to the website, the board reaffirmed its commitment to “free society, traditional values, and the common good” in its Feb. 16 rejection. of critical race theory. The statement also introduced a new committee that will investigate allegations of mission drift and identify corrective actions that have already taken place or should be implemented. Some school stakeholders, however, fear the board’s statement could stifle free thought on campus, as they made clear in a new petition released Tuesday evening (March 8).

“During discussions with professors, we have become aware that some professors may limit the content of their courses to avoid CRT teaching allegations,” the petition reads. “We ask the council to make a strong commitment to academic freedom and not ban entire theories or perspectives.” As of Friday morning, the petition had 134 signatures.

Natalie Kahler, a former Grove City student (’94) who authored the March 8 petition, identifies herself as a “very conservative” Republican who wants to see the school preserve its strong commitment to academic freedom. “For me, the whole point of a college-level university education is to teach kids to think and process information and hear debates and understand where you land on it,” she told Religion News Service.

The November petition against the CRT received 478 signatures from students, parents and alumni. The petition cited as evidence that the CRT is “asserting itself at the GCC” a fall 2020 chapel presentation by Jemar Tisby, a historian and author who writes about race and religion; a chapel that included a pre-recorded TED talk by Bryan Stevenson, founder of the Equal Justice Initiative and criminal justice reform advocate; resident assistant training that understood the concepts of white privilege and white guilt; and several books used in an educational studies course and in discussion groups, including “How to be an Antiracist” by Ibrahim X. Kendi and “Reading While Black” by Professor Wheaton Esau McCaulley.

“As Bible-based Christians, we are not defensive about racism,” the November petition read. “Where it exists, we must repent of it. We are, however, concerned when our students are falsely condemned and charged in unbiblical ways simply because of their skin color. The authors of the petition did not respond to Religion News Service in time to be included in this story. 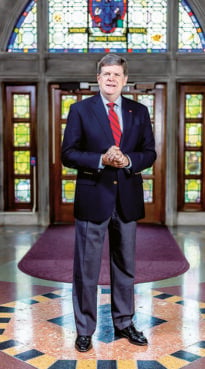 President Paul McNulty addressed the initial petition in a November 18 letter. In it, he also wrote that Grove City does not accept “critical theory” as “an appropriate framework for examining and understanding the real challenges facing our fallen world today.”

Since then, the CRT debate has only gained momentum. The authors of the November petition responded that they were unhappy with the president’s letter, and in the following months Grove City faculty and administrators publicly defended the institution.

In February, an unknown number of teachers released an anonymous letter also expressing concern that some examples of how CRT was taught at school illustrated “a mismatch between their approach and the historical mission and identity of the College”.

The letter, which called for an investigation into the concerns raised in the November petition and Grove City’s handling of the petition, said McNulty and his leadership team had “tarnished the College’s status as a conservative alternative of trust” and “eroded commitment and goodwill among the College’s core electorate.

On February 16, the council released its rejection of critical race theory. Two days later, 50 faculty members signed a letter, published in the Grove City student newspaper, denouncing the previous anonymous letter, saying it “does not speak for the faculty as a whole” and was ” full of misunderstandings, half-truths and statements made without proof.”

Warren Throckmorton, a psychology professor who signed the faculty’s second letter, told Religion News Service that some colleges were unsure how to respond to the board’s rejection of critical race theory because it doesn’t offer a definition. of the CRT. “Are we talking about the CRT being misused on social media, where it’s referencing everything everyone talks about regarding race? Or is it the real social science theory or the real legal theory of CRT?” He asked.

When asked if the board’s statement was indeed a ban on critical race theory, McNulty told Religion News Service that the statement was an extension of the school’s mission, vision and values. and that the new committee, the majority of which are current board members, will provide guidance for next steps.

“I think the board has an opportunity in this effort to try to provide more definition to the college on how we want to manifest this mission-aligned academic freedom in the future,” he said. declared. The president added that the review will also help determine how Grove City will lead conversations about race and racism in the future.

Grove City isn’t the only Christian college to be caught in the crossfire. Concordia University of Wisconsin, a Lutheran school and member of the Council of Christian Colleges and Universities, suspended a professor in February after accusing the school of being “under the influence of revivalism” for seeking a new president committed to diversity, equity and inclusion. In October, faculty at Cornerstone University, a CCCU school in Grand Rapids, Michigan, voted against their school’s new president, in part for his alleged opposition to diversity, equity and diversity efforts. inclusion.

According to Fea, Christian liberal arts colleges across the United States are in a testing period.

“There is a certain fearlessness that a true Christian liberal arts college must have, not to be afraid of ideas, or of what the press or political pundits try to define as boogeymen, or to think in ways critical to these things,” Fea said. “I think Grove City is a testing ground for that. And from what I’ve seen and heard on the ground, despite the criticism, they’re doing a decent job of responding to attacks from the right.

RELATED: Cornerstone University votes no confidence in president a day before inauguration

Is there a difference between an evangelical worship and a right-wing political rally?