Revive Europe, the conference and revival movement in European universities, will become a fully-fledged organization seeking to unite students and Christian ministries across the continent with a vision to pursue “a movement of God in the student generation in Europe “.

This new chapter for Revive is about to begin after its second edition at the end of 2022.

Revive’s new stages were made public on May 25, during a plenary session of the European Leadership (ELF) conference in Wisla, Poland. In a moment of congratulations, Tim Adams (General Secretary of the International Fellowship of Evangelical Students, IFES) prayed for the next steps for Revive Europe and its leaders.

Launched in 2019 with a student conference hosted by IFES and supported by 30 other student and mission organizations, the new organization will continue to put a a strong emphasis on unity and joint work with other evangelical movements and ministries mission-oriented and spiritual revival.

Prayer marches, digital pilgrimages Through the history of revivals in Europe, Revive Our Hearts weekends, and other initiatives will develop alongside the next student conference to be held in late 2022 in Germany.

“We stand together as we yearn for God to do something far greater than any organization“says Sarah Breuel Gospel orientation (read the full interview below). “We would love your prayers for God’s breath as we do our best to build this ‘ark’ and trust God for rain.”

Tim Adams Told Gospel orientation learn more about why the evangelical student movement IFES supports the next steps of Revive Europe. “Evangelism, discipleship and mission have always been hallmarks of student ministry connected to IFES, so we were thrilled to see Revive 2019 students return to their national movements with a new passion and commitment. in their personal testimony for Christ”. 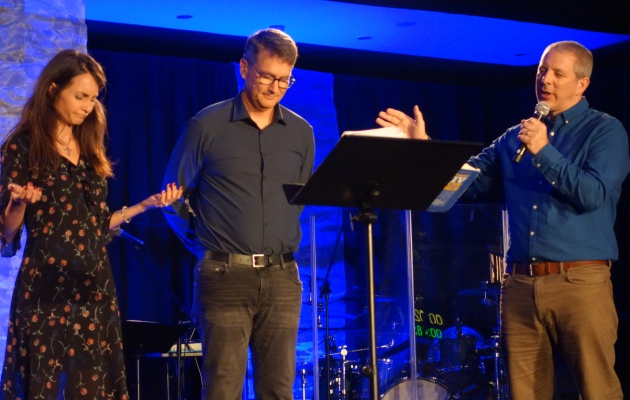 “Since then, the Revive vision and sense of calling has grown steadily,” Adams added, “so we think that’s the the right time for the team to have a dedicated governance and support structure. We continue to pray and work with Sarah and the Revive team to bring the good news of Jesus to students across Europe. That’s what it’s about “.

David ‘Monty’ Montgomery, who leads IFES Europe, said: “In 2019, Revive mobilized thousands of students to take mission seriously in Europe. We pray that as they move forward under these new arrangements which even more students will grasp this vision and be used by God across our continent in need”.

Revive Europe’s next big event will be its second conference for studentswhich will be held in Karlsruhe (Germany) from December 28, 2022 to January 2, 2023. More than 1,500 students from 90 nations had already registered six months previously. 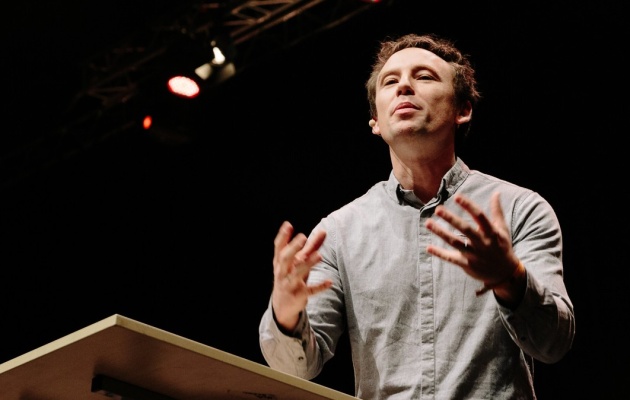 Under the theme “Turn the World Upside Down” (Acts 17:6), the biblical expositions will examine how the New Testament describes the arrival of the gospel on the European continent (Acts 16-19). The three convictions of the movement (Revive our hearts, revitalize our universities, relaunch Europe) will follow the evening sessions, with speakers such as Oxford professor John Lennox, the leader of the prayer movement Pete Greig, the lawyer of justice Danielle Strickland among others.

The program will also include testimonials from all over Europe, lively cults and seminars to choose to vary from gearing up for college evangelism (apologetics, personal evangelism, mission weeks, engaging the public arena) to integral mission (environment, breaking cycles of poverty, being an ambassador of Christ in areas of study/work) and cross-cultural mission (led by the various mission agencies that will be exhibiting at Revive). The organization also stands out “heavy times of prayer so that God breathes again in every region of Europe”. 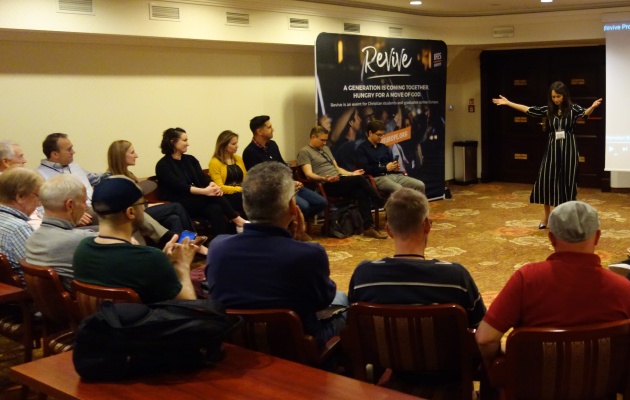 A gathering of Revive Europe supporters during the 2022 ELF conference in Wisla, Poland, 22 May. / J. Forster.

Sarah Breuel shared more about Revive Europe’s vision and expectations for the coming years in the following interview.

Question. What is your dream for Europe?

Our arid continent needs fresh water currents. We cannot simply strategize for the re-evangelization of Europe, important as the strategies are. We need a new outpouring of the Spirit of Jesus to turn the tide of the gospel on our continent.

Q. Tell us more about your personal calling behind Revive.

A. On December 2, 2016, I experienced something profound and my life was never the same again. God woke me up in the middle of the night in Oxford (UK) and spoke deeply to my soul. In the following months, I had a consuming thirst to be in the Word of God, in presence, in prayer and in adoration.

I found out later that the technical term for what I was going through was called ‘personal revival’. I had no particular interest or knowledge about revival, but it was like God ‘hijacked’ my prayer life, and I would pray day in and day out for a Move of God in the student generation in Europe.

I thought it was just a personal experience, but to my surprise in the following months I came across several leaders in Europe who had similar experiences, prayers and desires. Could it be that God was calling us to pursue together a Move of God in the student generation in Europe?

Q. Revive Europe had its first edition in December 2019. What was some of the impact of that?

A. In our first edition, by God’s grace and to God’s glory, we gathered over 3,000 students and graduates from 78 nations for five days in Germany. The pandemic broke out right after.

We decided to put together online prayer meetings, not knowing how many would show up. To our surprise, 350 students across the continent were joining us in those prayer meetings.

We wanted to steward what God was doing. Students in Croatia were on fire and baptized 8 of their friends during the pandemic. Students in Berlin started to meet frequently to pray for revival in their city. They saw some friends come to Jesus, and this group has been meeting consistently to pray for about two and a half years now.

In Belfast last year, about 400 students came together from different Universities to pray for revival in their city. We see these as just some ‘seeds of revival’, but we learn not to despise small beginnings (Zechariah 4:10). 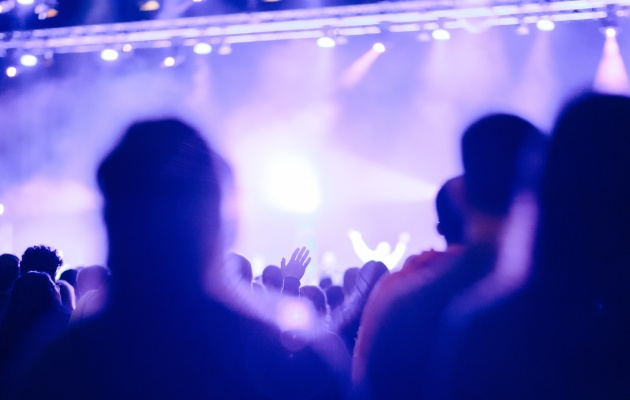 Q. How is Revive to move from a conference to a Movement?

A. Noah’s story was significant for our team. When God asked him to build the ark, it made no sense. But when the rain came, nothing else made sense except the arch. Here are some ways we feel called to “build an ark” when we trust God for rain:

Large – Revive Europe Conference. The second edition at the end of this year (2022), where we expect more than 3,000 participants from 90 nations.

Local – Seeds of renewal. We have identified places where we see the seeds of revival (Berlin, Belfast, Durham, Helsinki and others) and we meet frequently to encourage each other and put more wood in the fire. Some of them hold retreats in their town to bring about personal renewal in students/young adults, followed by outreach at the University and on the streets a few weeks later.

Continental – Prayer Walks. We project a vision to see prayer marches take place in all 2,200 universities across Europe in 2023. This is a coalition that has emerged over the past two years between Cru, IFES and Prayer 24 -7, called “The Spark”.

History – Bringing pilgrimages back to life. We engage with previous movements of God (Moravians, Wesleys, Welsh Revival, etc.) through a digital pilgrimage. The goal is to learn what God has done in the past and to ask Him to do something new.

Q. Finally, tell us a bit about who is joining the Revive board and how you intend to learn from and encourage each other.

A. The first edition of Revive had about 30 partners beyond IFES: Cru, Navigators, Students for Christ, Steiger, YWAM, OM, Lausanne, European Evangelical Alliance, 24/7 Prayer, and many others. As IFES blesses Revive to become a new organization, we are grateful for a strong Board of Directors assembled with Dave Patty (President of Josiah Venture) as President, a strong IFES presence with Zefjan Nikolla, Luke Greenwood (Steiger), Andreas Nordli (YWAM), Jon Burns (GEM), Lindsay Olesberg (Wycliffe) and Ole-Magnus Olafsrud (Lausanne Movement, as Senior Advisor). We stand together as we yearn for God to do something far greater than any organization.

We would like your prayers for the breath of God as we try our best to build this “ark” and trust God for the rain.

Challenged to rekindle the flame of the gospel, Evangelical Focus

Evangelical Christians have reconfirmed their allegiance to Conservative candidates

When did the United States become so evangelical?