Top evangelical leader warns: Israel could lose our support if Netanyahu is ousted

A prominent American evangelical Christian leader warned on Monday that Israel could lose the support of its 77 million supporters if the Knesset confirms the so-called “change of government” and overthrows Prime Minister Benjamin Netanyahu.

Speaking at a press conference in Jerusalem, Mike Evans, who leads the “Jerusalem Prayer Team”, lambasted members of the unity government who will face a confirmation vote on Sunday, calling them coalition of anti-Zionist and post-Zionist Arabs that will “wave a white flag” and surrender to radical Islam. He said the next vote in the Knesset was “for or against Zionism.”

“Bibi Netanyahu is the only man in the world who unites evangelicals,” he said.

Asked later by reporters if he would work against the government of Israel, he said: “We will always support the State of Israel but we will not have the same position as before, because we will not have trust and trust is everything. ”

Evans has campaigned in recent days to persuade Israelis not to abandon Netanyahu, making his point in a slanderous post on the Times of Israel blogging platform, in which he said God chose Netanyahu to lead. Israel.

His message accuses leaders of the anti-Netanyahu “change bloc” of seeking to “crucify a man they hate and are willing to destroy the nation to do so,” and calls them “rabid dogs possessed by the power and revenge.

He compared them to Jewish leaders during the Holocaust and seemed to blame the Jews for bringing the Nazi death camps upon them, writing: “The German Jews were busy insulting each other, drunk on the wine of pride . They didn’t see the smoke rising from Auschwitz because they were more German than Jewish.

Evans also released an open letter to Prime Minister-designate Naftali Bennett, calling him a “disgusting disappointment” and accusing him of “shitting in the face” of American evangelicals.

He apologized for it on Monday, saying Bennett “has actually been a strong Zionist most of the time, I know him, and he deserves more respect.”

“I want to personally apologize to Naftali Bennett for using harsh statements and foul language,” he said.

But at his press conference he once again launched an attack on the leaders of the change bloc, saying they were “blinded by your hatred, by your petty politics and your obsession with power”.

He belittled Bennett, repeatedly calling him “seven places” in reference to the low number of seats won by his Yamina party in the March elections and saying world leaders wouldn’t take him seriously and wouldn’t even know his name. name.

“You have a prime minister who is not that nice, but I’ll tell you one thing: the power brokers of the word trust him,” Evans said, conceding Netanyahu had flaws but saying the biblical King David was “10 times more imperfect.

Getting emotional at times, Evans said he was motivated to oppose the new government because he was tired of going to funerals for terror victims. “Unity governments produce widows and orphans because they lacked the strength to stand up against the demons,” he said.

Evans also criticized Israelis for being ungrateful for all that American evangelicals had done for Israel and seemed to suggest that he believed the latter should have a say in the direction of Israeli policy.

“Nobody asks us, even though we are 77 million,” he said, claiming credit for the Trump administration’s decision to recognize Jerusalem as Israel’s capital. “You didn’t get that from the Jewish community in America. You got it from evangelicals. Donald Trump wouldn’t have given you anything in four years if it wasn’t for us. 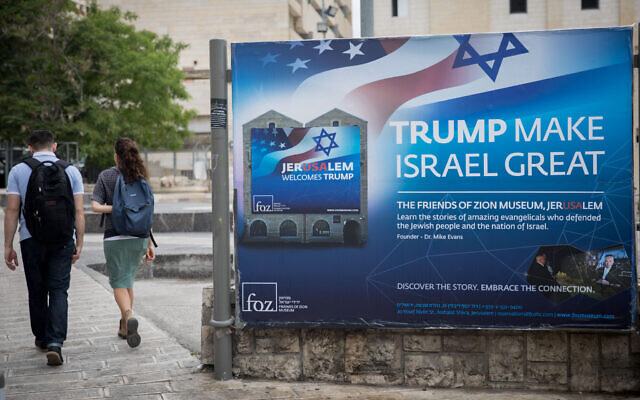 People walk past a poster welcoming US President Donald Trump to Jerusalem on May 19, 2017 (Yonatan Sindel/Flash90)

Evans was behind dozens of billboards that were put up around Jerusalem in May 2017 urging Trump to “make Israel great.” The purpose of the billboards was to remind Trump of his campaign promise to evangelicals to move the US Embassy from Tel Aviv to Jerusalem.

Evans said he reassured an Israeli leader who had expressed doubts about Trump’s decision: “Relax, we have tremendous power over him, it’s going to happen.”

Netanyahu has been instrumental in recent years in shifting the diplomatic focus from Israel to the United States, from supporting the American Jewish community, which is largely liberal and critical of Israel, to seeking evangelistic support.

This was underscored last month when Israel’s former ambassador to the United States, Ron Dermer, suggested that Israel should prioritize the “passionate and unequivocal” support of evangelical Christians over that of American Jews. , who he says are “disproportionately among our critics.” 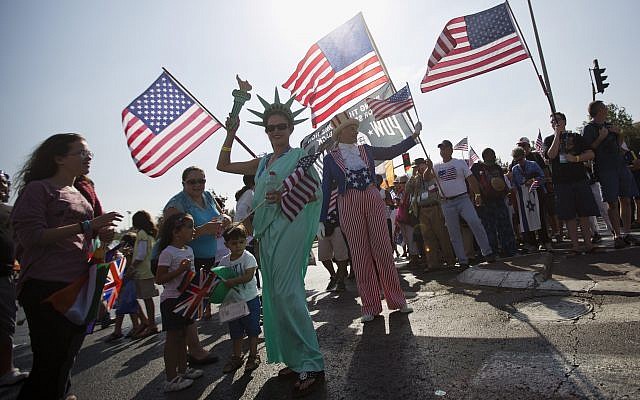 Illustrative: Evangelical Christians from various countries wave flags as they march to show their support for Israel in Jerusalem. (AP Photo/Sebastian Scheiner, File)

“People need to understand that the backbone of Israel’s support in the United States is evangelical Christians. This is true because of the numbers and also because of their passionate and unequivocal support for Israel,” Dermer said.

The organization headed by Evans, the “Jerusalem Prayer Team”, had more than 75 million followers on its Facebook page until recently. The page was taken down in May without explanation. The purpose of the organization is to encourage Christians around the world to “pray for the peace of Jerusalem” as well as to inform them about developments in Israeli politics from a Christian perspective.

According to the website, Jerusalem is important because “almost all of the prophecies point to Jerusalem and the end times; the new temple under construction, the Antichrist, the battle of Armageddon and the 144,000 evangelists. When we pray for the peace of Jerusalem, we pray for the Lord to return. “So Christ was once offered to bear the sins of many; and to those who wait for him he will appear a second time without sin for salvation. 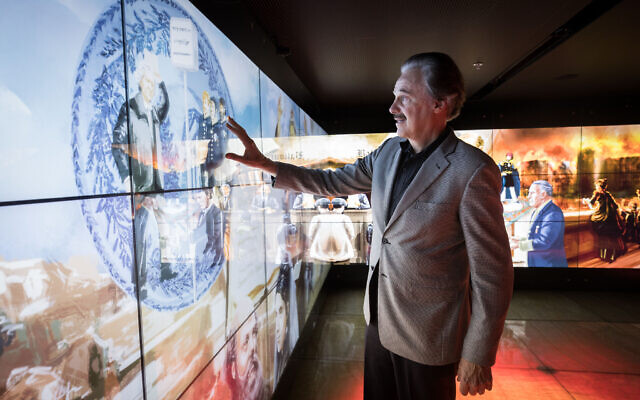 Evans is also responsible for the Friends of Zion Heritage Center, a multimedia museum in central Jerusalem dedicated to the history of non-Jewish friendship with Jews and Israel.

Evans said he met with lawmakers from the Change bloc, trying to convince them not to oust Netanyahu.

Evans claimed four deputies told him they were ready to jump ship, but each did not want to be the first.

“Bibi Netanyahu’s death has been greatly exaggerated,” he said.

Evans’ statements appeared to draw criticism from another evangelical organization, the International Christian Embassy in Jerusalem. In a statement Saturday, the group’s chairman, Jürgen Bühler, said: “No one should doubt that pro-Israel Christians around the world have great respect for Benjamin Netanyahu and his many accomplishments as Israel’s longest-serving prime minister. . But we detect no widespread movement among evangelicals, either in America or around the world, to stop supporting Israel if it is replaced.

Without specifically mentioning Mike Evans, the statement continued: “In fact, Israel has gained millions of new Christian friends around the world over the past decade and we expect this trend to continue.

Russian evangelical leader: “I mourn what my country has done”

Russian evangelical leader apologizes to Ukrainian Christians for invasion: ‘I mourn what my country has done’

Becki Falwell is the wife of evangelical leader Jerry Falwell Jr. Details on Becki’s affair with Pool Boy in a new interview