But white evangelicals, most of whom are proud Republicans, have the strongest opinions of Israelis. A whopping 86% of white evangelicals said they felt warm towards Israelis – more than any other Christian group. In comparison, only 58% of black Protestants felt warmly toward Israelis.

Overall, the March survey of 10,441 American adults found that two-thirds of Americans express at least a somewhat favorable view of the Israeli people. But he also found a modest warming of Palestinians, among young Americans, and a general lack of familiarity with and support for the Boycott, Divestment and Sanctions movement, which aims to pressure Israel to change its policy towards the Palestinians. Palestinians.

As with so many other political issues (abortion, immigration, race, guns), white evangelicals stand apart from other religious groups in their views. As far as Israel is concerned, these views seem firmly rooted in their faith.

A road sign leading to the new US Embassy is seen ahead of the official opening in Jerusalem, May 13, 2018. (AP Photo/Ariel Schalit)

Many evangelicals view the creation of Israel in 1948 as the fulfillment of Bible prophecy that would usher in the return of Jesus, although the survey did not ask about it.

It is perhaps unsurprising that evangelicals score lowest in their estimation of Palestinians (37%), even though some Palestinians are other Christians (the majority are Muslims).

White evangelicals are also the religious group most likely to express a very or somewhat favorable opinion of the Israeli government (68%), compared to Catholics (50%), non-evangelical white Protestants (51%), black Protestants (43%) and people with no religious affiliation (31%). The survey did not have enough respondents from Jewish, Muslim or other religious traditions to report on their responses. 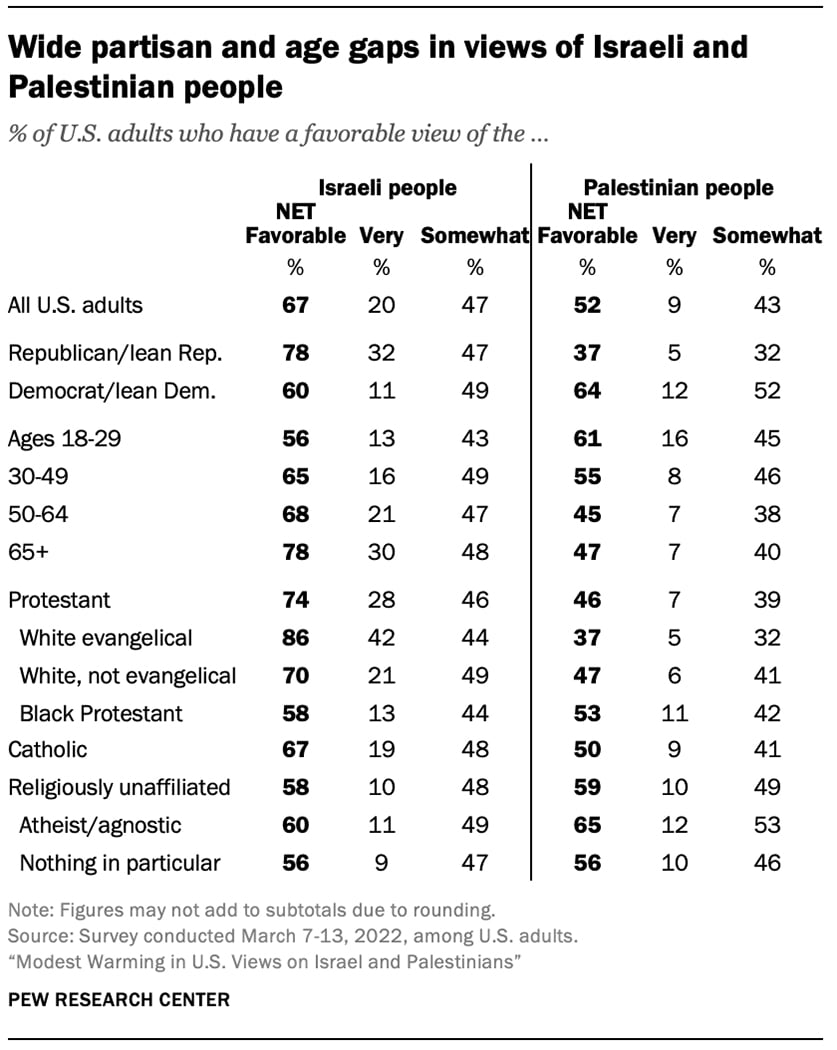 This generational shift in US attitudes toward Israel was reflected in another survey, commissioned by researchers at the University of North Carolina at Pembroke and conducted by the Barna Group. This 2021 survey found that younger evangelicals are much less supportive of Israel than older evangelicals. Support for Israel among young evangelicals dropped from 75% to 34% between 2018 and 2021.

“Clearly there are more favorable views of Palestinians among young people,” said Ariela Keysar, associate research professor at Trinity College in Hartford, Connecticut. “I see it as a kind of generational memory. Older people see Israel before 1948, before Israel was established as a democracy surrounded by hostile Arab countries. Young people are shaped by current events. Many encounter anti-Israel views on campus. They encounter protests. The elderly were not exposed to this.

Perhaps most surprisingly in the survey, 84% of Americans said they had heard “not much” or “nothing at all” about the Boycott, Divestment and Sanctions movement.

The BDS movement, launched by Palestinian groups in 2005, states that “Israel occupies and colonizes Palestinian land, discriminates against Palestinian citizens of Israel and denies Palestinian refugees the right to return to their homes.”

Americans, Democrats and Republicans, young and old, and of various Christian denominations had relatively uniform views on BDS, that is, they professed ignorance.

“BDS has a lot of interest in a very small percentage of people,” said Ari Y. Kelman, associate professor of education and Jewish studies at Stanford University’s Graduate School of Education. “It’s not about galvanizing people as an organizational strategy, as South Africa’s divestment managed to do for a much wider section of the population.”

Overall, 5% of Americans say they support the BDS movement against Israel.

The margin of error for the full survey of 10,441 respondents was plus or minus 1.5 percentage points.

Challenged to rekindle the flame of the gospel, Evangelical Focus

Evangelical Christians have reconfirmed their allegiance to Conservative candidates

When did the United States become so evangelical?